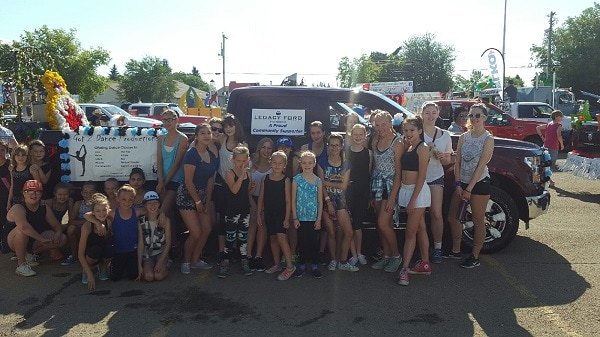 Over 10,000 spectators enjoyed the three-mile parade, which was the kickoff to the Ponoka Stampede. The theme, "80 Years of Stampede Legends" is a tribute to the 80th anniversary of the event. Organizations, clubs and teams joined together with local dignitaries to parade through the streets of Ponoka with a display of more than 150 floats, which represented the local history, tradition and heritage of this event.

Showcasing the spirit of the parade were festive and elaborately decorated floats, well-loved mascots and classic cars, along with marching bands and clowns to entertain the spectators. Legacy Ford Ponoka sponsored the Got 2 Dance Production float.

The Ponoka Stampede is a tribute to the western culture and the rodeo, which has become one of the biggest events in the world. From its humble beginnings in 1936 with a two-day stampede, the event has grown to include dances, concerts and parades as well as the traditional rodeo activities where cowboys and cowgirls compete for over a half-million dollars in prize money.

Fun for All Ages

With kids' activities like the wild pony race and amusement rides, there's something for everyone at the Ponoka Stampede. Midway is Canada's largest traveling amusement company with more than 25 rides. Young children found rides just for them while older kids enjoyed the thrill of those that twist and turn, carrying them higher for even more fun.

Adults had the opportunity to enjoy a beer garden dance on the largest dance floor in Ponoka. Live entertainment provided the inspiration for dancers to try out their best moves.

World professional chuckwagon races were held for six nights as fans cheered their favourite teams. And of course, the big highlight for the event was the rodeo as riders from all over North America compete for cash prizes. A second chance at money came from the Stampede Showdown, which gave the top four competitors from each category a chance to compete for $15,000 in bonus money.

There was something for everyone with fireworks to end the evenings and the talent show which showcased some of the best local singers. A farmer's market and western art show brought in exhibitors to sell their wares. The big attractions included country music performers Clint Black and Dallas Smith.

The city is justifiably proud of this event and how the volunteers work hard to ensure attendees have a wonderful time. Legacy Ford Ponoka is honoured to be a part of this community achievement.