While the first
generation of the Ford Fusion was a resounding success, the second generation has blossomed even
further. The 2016 Ford
Fusion Energi brings advanced hybrid power
to the model line-up, housing an economic powerplant while retaining the sporty exterior and
well-equipped interior of the conventionally-powered model. The Energi is available in two trim levels: the SE and Titanium
.
Disclaimer: Video Shows 2015 Ford Fusion
Model

Plenty of Substance Under a Stylish Exterior

The sleek yet mature exterior of the 2016 Ford Fusion Energi show that
being green doesn't mean you have to sacrifice a car's looks. The hexagonal grille and molded hood, along
with a well-proportioned profile, give the Fusion a slightly upscale, European feel. Heated exterior power
motors are standard on all models, as are LED taillamps and fog lights. The easiest way to tell the
difference in trims is the door handles; the SE trim has body colour only, while the Titanium trim gets
chrome accents along with a decklid spoiler. They also feature different wheels, with 17-inch Sparkle Silver
painted aluminium wheels on the SE and 17-inch, 10-spoke painted aluminium wheels on the Titanium. A power
moonroof is optional on both trim levels.

In the passenger cabin of the 2016 Ford Fusion Energi, there is ample
space for five adults, including nearly 1000 millimeters of head room in the front, and almost 1400
millimeters of hip room in all seats. The trunk, meanwhile, has 232 liters of cargo space. All Energi
models come with leather-trimmed and heated front seats with a 10-way adjustable driver's seat. The Titanium
also features a 10-way adjustable passenger's seat, versus a six-way version in the SE, while the driver's
seat has memory setting. The Titanium also has optional ventilated front seats. Every version of the
Energi comes with dual-zone electronic automatic temperature control, leather trim throughout the
cabin, a leather-wrapped steering wheel, and much more. On the entertainment front, a 10-speaker audio with
CD player, MP3 capabilities, audio input jack and USB is standard, while the Titanium upgrades to a
12-speaker Sony system. SYNC with MyFord Touch is standard on all versions, while a voice-activated
Navigation System is an optional addition to both the SE and Titanium trims. 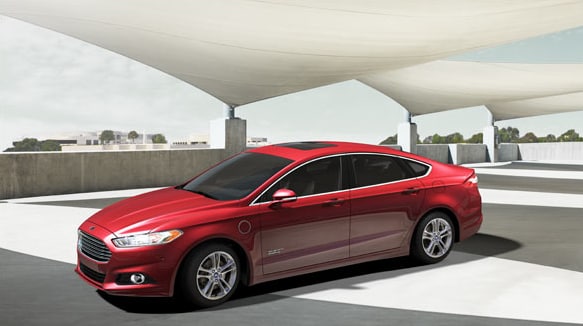 The 2016 Ford Fusion Energi features an engine that can be used as a
hybrid, or as an all-electric version with a range of 19 miles, thanks to the 7.6 kWh Lithium-ion
battery. Charging is done through a port on the driver's side, via 120-volt house current or through an
optional 240-volt charging system that can fully charge it in 2.5 hours.

Your actual fuel consumption will vary based on driving habits and other factors. 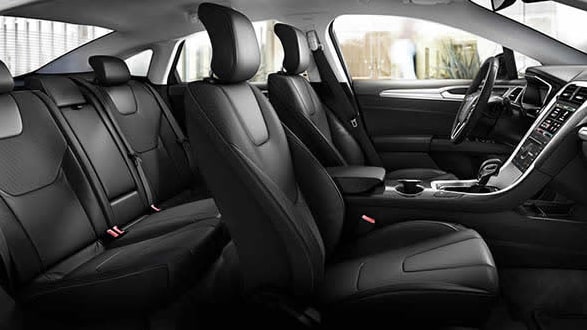 The Fusion model has been a huge success for Ford, and the 2016 Ford
Fusion Energi has a number of awards backing it up.

The 2016 Ford Fusion Energi has the full support of Ford's warranties
behind it. 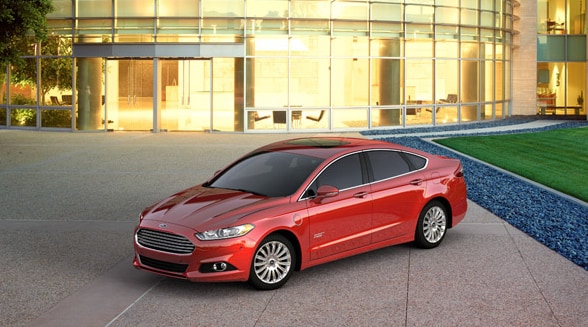 With the 2016 Ford Fusion Energi, Ford has a clear winner in the
mid-sized sedan category. Its combination of style, substance, and wallet-friendly fuel economy makes it
a vehicle that can appeal to car buyers across the board. Take a test drive, and see just how the
Fusion Energi is the right car for your lifestyle.

Let your legacy start here with the 2016 Ford Fusion Energi at Legacy Ford Ponoka. Your local Ponoka Ford Dealer - Legacy Ford
Ponoka has a wide array new and pre-owned models to choose from. What are you waiting for? Visit
the showroom today!